The Impact of Climate and the Physical Environment on Human Health 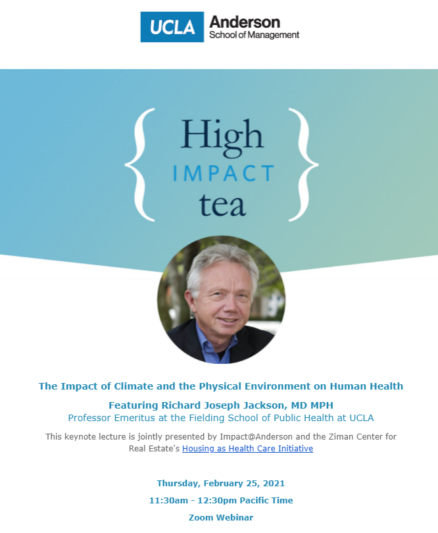 Richard Joseph Jackson, MD MPH FAAP HonAIA HonFASLA, is Professor emeritus at the Fielding School of Public Health at the University of California, Los Angeles, where he was Department Chair in Environmental Health Science. A pediatrician, he has served in many leadership positions with the California Health Department, including the highest as the State Health Officer.  For nine years he was Director of the CDC’s National Center for Environmental Health and received the Presidential Distinguished Service Award.  In October, 2011, he was elected to the National Academy of Medicine of the National Academy of Sciences and since 2019 he has been co-lead of the NAM’s Health and Climate Interest Group.

Jackson was instrumental in establishing the California Birth Defects Monitoring Program and in the creation of state and national laws to reduce risks from pesticides, especially to farm workers and to children. While at CDC he established major environmental public health programs and instituted the federal effort to “biomonitor” chemical levels in the US population.  He has received its Hero Award from the Breast Cancer Fund; Lifetime Achievement Awards from the Public Health Law Association and from the New Partners for Smart Growth; the John Heinz Award for national leadership in the Environment; the Sedgwick Memorial Medal, the highest award of the American Public Health Association for Distinguished Service.  In 2015 he received the Henry Hope Reed Award for his contributions to Architecture.

Dick Jackson lectures and speaks on many issues, particularly those related to Climate Heating, Built Environment, and Health.  He co-authored the books: Urban Sprawl and Public Health, Making Healthy Places, and Designing Healthy Communities for which he hosted a four hour PBS series. He has served on many environment and health boards, as well as the Board of Directors of the American Institute of Architects. He is an elected Honorary Fellow of American Institute of Architects and elected Honorary Fellow of the American Society of Landscape Architects. Jackson has testified before the US Congress and California Legislature many times.  He is from Newark NJ.  When he was age 3, his World War 2 fighter pilot father died of polio.  He and his spouse, Joan, live in Berkeley, California, and have three grown children and five grandchildren.