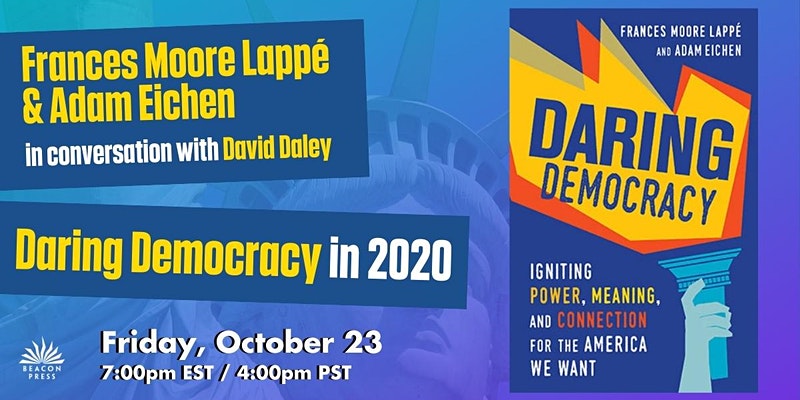 Frances Moore Lappé and Adam Eichen will be joined by author David Daley to apply their book Daring Democracy to Decision 2020. They will discuss the ways individuals can cohere and strengthen the core tenets of Democracy as well as tie the book’s lessons in time for the November election.

An optimistic book for Americans who are asking, in the wake of Trump’s victory, “What do we do now?” The answer: We need to organize and fight to protect and expand our democracy.

Americans are distraught as tightly held economic and political power drowns out their voices and values. Legendary Diet for a Small Planet author Frances Moore Lappé and organizer-scholar Adam Eichen offer a fresh, surprising response to this core crisis. This intergenerational duo opens with an essential truth: It’s not the magnitude of a challenge that crushes the human spirit. It’s feeling powerless–in this case, fearing that to stand up for democracy is futile. It’s not, Lappé and Eichen argue. With riveting stories and little-known evidence, they demystify how we got here, exposing the well-orchestrated effort that has robbed Americans of their rightful power. But at the heart of this unique book are solutions.

Even in this divisive time, Americans are uniting across causes and ideologies to create a “canopy of hope” the authors call the Democracy Movement. In this invigorating “movement of movements,” millions of Americans are leaving despair behind as they push for and achieve historic change. The movement and democracy itself are vital to us as citizens and fulfill human needs–for power, meaning, and connection–essential to our thriving. In this timely and necessary book, Lappé and Eichen offer proof that courage is contagious in the daring fight for democracy.

Frances Moore Lappé and Adam Eichen are the authors of Daring Democracy: Igniting Power, Meaning, and Connection for the America We Want.

Frances Moore Lappé is the author or co-author of 19 books about world hunger, living democracy, and the environment, beginning with the three-million copy Diet for a Small Planet in 1971. She is also a contributing editor at Yes! Magazine and Solutions Journal. She is the cofounder of three organizations, including Oakland based think tank Food First, and more recently, the Small Planet Institute, which she leads with her daughter, Anna Lappé. Frances and her daughter have also cofounded the Small Planet Fund, which channels resources to democratic social movements worldwide.

Adam Eichen is a writer, researcher, and organizer. He serves as Campaigns Manager for Equal Citizens, a non-partisan pro-democracy organization founded by Lawrence Lessig., and is also a member of the Democracy Matters board of directors. Over the past several years, his research has focused on campaign finance, voting rights, and comparative election policy.

David Daley is a senior fellow for FairVote and the author of Ratf**ked: The True Story Behind the Secret Plan to Steal America’s Democracy, which helped spark the recent drive to reform gerrymandering. David’s new book, Unrigged: How Americans Are Battling Back to Save Democracy, chronicles the victories and defeats in state efforts to reform elections and uphold voting rights. When writing for the Hartford Courant, he helped identify Mark Felt as the “Deep Throat” source for Bob Woodward and Carl Bernstein.

This event is free and open to the public.